It’s not just the normal operating parameters that influence the design, performance and durability of a dynamic seal, but the characteristics of the machinery in which it is to be fitted also need to be understood and considered so that the best solution can be adopted. Dynamic runout is usually seen as eccentric runout and is normally detected by means of a dial gauge and recorded as Total Indicator Runout (T.I.R.)

There are some differences between rotating and reciprocating applications, but the basic interpretation of these terms can be explained as follows:

Offset Misalignment – is where the centre line of a shaft does not follow the centre line of the housing – but the difference is fixed and parallel to both centre lines. If we measured the radial distance between shaft and housing at four fixed points and rotated the shaft the recorded measurements would be different at each point but would not change with shaft rotation. 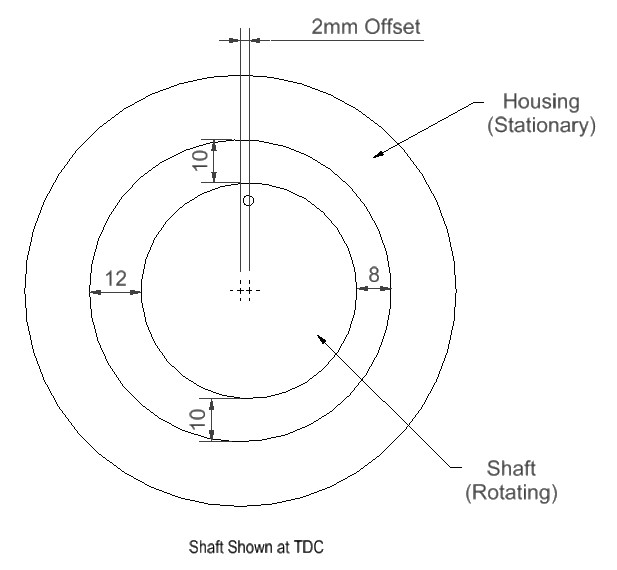 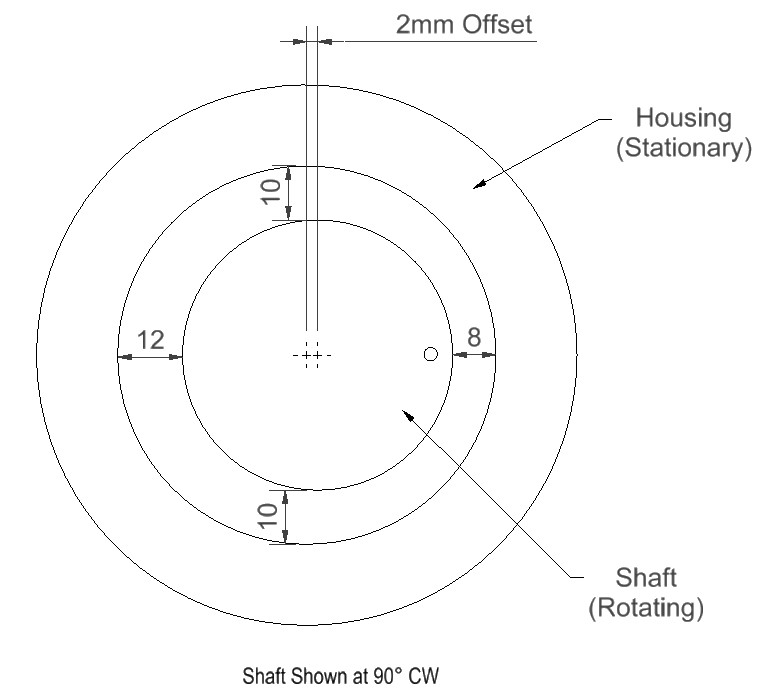 In the figure above the dimensions recorded at TDC, 90°, 180° and 270° would be constant irrespective of the position of the shaft. If a dial gauge is used and is fixed to the housing then shaft rotation would not highlight any dimensional variation, only measuring the radial gap or mounting the dial gauge onto the shaft and clocking the housing bore would highlight variation. This type of misalignment is arguably not dynamic runout but is included because it does influence seal performance. This type of misalignment is also referred to as eccentricity.

Offset over stresses the seal at one fixed point. Inspection of a seal that has been subjected to this condition often shows localised wear at the point where the radial distance is least. If the design of the seal does not permit the level of offset in the system leakage will occur because either the seal wears away at the narrowest radial gap or at a point 180° away the seal does not contact the shaft with the appropriate levels of interference, particularly problematic in pressure applications. If two or more seals are fitted to the same shaft, then each seal will show the same wear pattern and at the same angular position.

An animation of Offset Misalignment

Angular Misalignment – is where the centre line of a shaft runs at an angle to the centre line of the housing – unlike offset misalignment if we measured the radial distance between shaft and housing at four fixed points and rotated the shaft we would expect to see constantly changing values, but within a minimum and maximum range. However, if we were to measure at a different position of the shaft we would record constantly changing values within a different minimum and maximum range.

It is likely that at some point along an assembly containing angular misalignment that the centre line of the shaft and the centre line of the housing will intersect. Taking radial dimensions at this point will not highlight any variation no matter if the housing bore is clocked or the shaft is clocked.  In order to identify angular misalignment it is necessary to take dial gauge readings a distance apart from each other or to clock against the end face of the seal housing.

This type of misalignment is seen when shafts are bent, either as a manufacturing defect or during process conditions when the shaft might be subjected to lateral loads.

The effect on the seal is a constantly changing radial section at every point of the seal circumference. This has the effect of influencing the seal geometry and seal face load constantly and increases the risk of fatigue failure. The influence on the seal is greater with increased speed where there is potential for the seal being unable to react to radial changes and no longer maintain contact with the shaft. Seal wear pattern is generally uniform around the entire seal but the wear rate is often accelerated. The seal contact band is often wider than expected due to both the increased face load and axially changes in the position of the contact band as the shaft rotates.

An animation of Angular Misalignment

If you have any concerns with surface misalignment, contact our sealing experts to discuss how FTL can support you with custom solutions for your requirements.

Back to main news